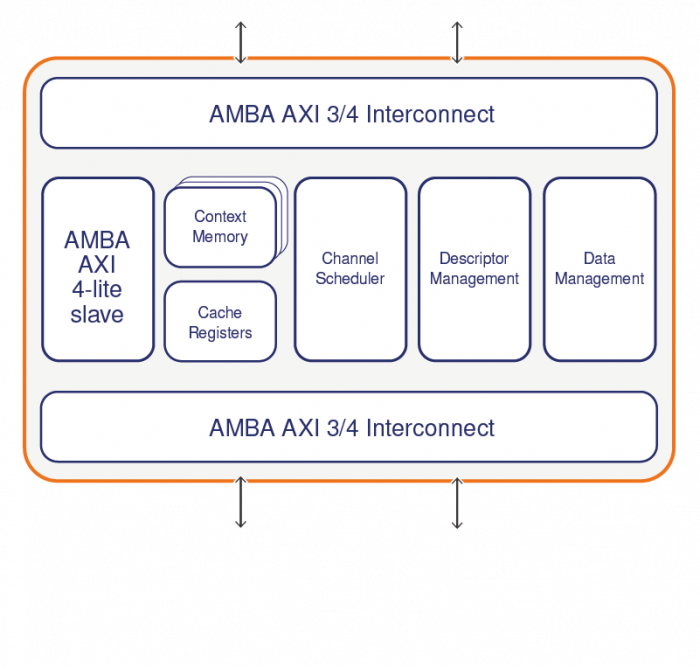 The vDMA-AXI IP Core implements a highly efficient, configurable DMA engine specifically engineered for Artificial Intelligence (AI) optimized SoCs and FPGAs that power tomorrow’s virtualized data centers. The vDMA-AXI IP is intended to be used as a centralized DMA allowing concurrent data movement in any direction, and is particularly suited for many-core SoCs such as AI and ML processors. The vDMA-AXI IP Core is based on a novel architecture that allows hundreds of independent and concurrent DMA channels to be distributed among a number of Virtual Machines (VMs) or host domains without sacrificing on performance and resource utilization. The vDMA-AXI IP is optimized to deliver the highest possible throughput for small data packet transfers, which is a common weakness in traditional DMA engines. The vDMA-AXI IP can optionally be attached externally to PLDA’s XpressRICH-AXI PCIe controller IP for PCIe 5.0 for a scalable enterprise class PCIe interface solution for compute, network, and storage SoCs.

VDMA-AXI is controlled through a set of registers accessible from the AXI4-Lite interface. The register map is extensively described in the VDMA-AXI reference manual. To help with software development, a PCIe device driver is available along with a C API, and demonstrates VDMA-AXI operation when connected externally to a PCIe interface such as PLDA's XpressRICH-AXI controller IP for PCIe 5.0. The PCIe device driver is available for Linux x64 and Windows x64.

Looking for help integrating our vDMA-AXI IP? Our Advanced Design Integration (ADI) team is here to help shorten your development cycle by proposing expert services in the following areas:

Our rigorous verification process ensure customers can focus on the core of their application.

Video demonstration of the vDMA-AXI IP