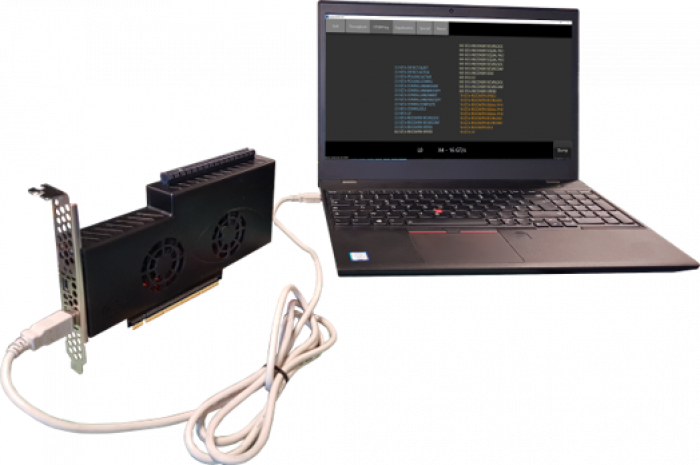 Interposer Card for Diagnostic Testing, Exercising and Debug of PCIe Devices at up to Gen4 16GT/s speed

INSPECTOR is a PCIe 4.0 compliant interposer module designed for non-intrusive monitoring, diagnostic, exercising and debug of PCIe devices. INSPECTOR uses transparent switching technology to connect on the upstream side to a PCIe host platform, and on the downstream side to the device under test (DUT). INSPECTOR supports PCIe 1.x, 2.x, 3.x, and 4.0 interfaces on either ports, and up to 8 lanes (x8). It is typically used for bring-up and diagnostic testing of PCIe 4.0 DUTs at PCIe 4.0 16GT/s speed using existing PCIe hosts operating at PCIe 3.0 8GT/s speed, but can support any link speed/width combination on upstream and downstream ports. INSPECTOR's built-in diagnostic capabilities allows validation engineers to instantly diagnose issues with their PCIe devices, without the need for expensive test equipment. In particular, it enables design, test and validation engineers to:

It also allows firmware/software engineers to develop their devices firmware and software on the actual production system running the Operating System of choice.

PLDA’s INSPECTOR diagnostic and debug tool for PCIe 4.0 passed all Gold and Interoperability tests for systems with CEM slots

09.06.2019
PCIe Device links as expected (L0 in x8-Gen4) but is not detected by the system INSPECTOR is a hardware and software platform ...

06.19.2019
Discover how Inspector can be used all along your hardware validation cycle From lab prototyping to production testing, PCIe ...