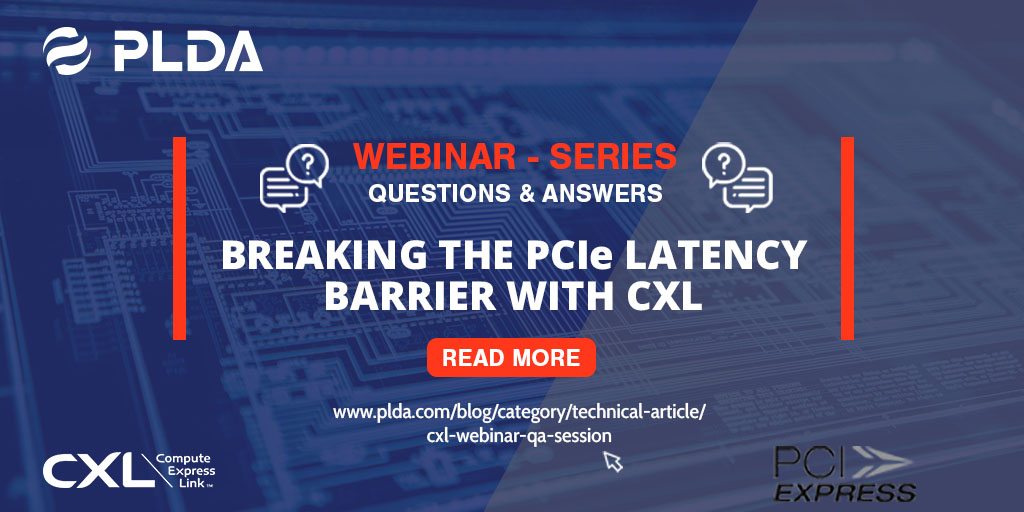 We recently published a Webinar about the benefits of CXL to reduce latency. After exploring the following topics:

We received many questions in both Chinese & English and thought  this blog post would be a good way to provide answers. If you were unable to attend the live webinar, the full recording is available here.

Doesn't it look like in order to decrease latency, we are adding resources on CXL devices,, such as cache agents and more..?

How about the comparison of latency between PCIe 5.0, CCIX and CXL?

CCIX traffic is encapsulated into PCIe TLP, so CCIX latency is larger than PCIe. So in terms of relative latency values, we have: CXL.mem/cache Latency  <  PCIe Latency  <  CCIX Latency ..

Is there an application for using CXL on SSDs?

Can this be used to improve the latency for device CPUs accessing the host memory buffer?

Yes, CXL.cache is designed for efficient access from accelerators to host memory (as well as the other way around)

Is there a separate certification needed for CXL devices?

For PHY developers, what differences are there between PCIe and CXL in terms of PHY implementation?

The CXL stack leverages the existing PCIe PHY layer, so the existing PCIe 5.0 PHY can be used transparently for PCIe or CXL. That being said, it is generally recommended to support sync header bypass, drift buffers and serdes architecture to achieve the lowest latency possible.

In layman’s terms, is this an enhancement for PCIe or a replacement?

PCie and CXl are different protocols that coexist at the moment, as they meet different needs.

PCIe is widely used across verticals, while CXL may find its sweet spot in specific applications that require lower host-to-device and device-to-host latency.

No, CXL.cache allows coherency at the system level, between devices and host. While ATS is an address translation service, with built-in cache for translation tables - they are two different things with different purposes.

The CXL training scheme is essentially the same as the PCIe one.

The only difference is the use of specific Training Sets to perform Alternate Protocol Negotiation.

How different is CXL 2.0 from CXL 1.1 for host and device

We are not at liberty to comment on future CXL specifications. Contact the CXL consortium for further details..

I understand that Cpl for MemWr in PCIe is avoided for performance improvement with a tradeoff.

Can you please help me understand why CXL spec writers chose to incorporate a completion for posted write and what impact this has on performance?

This statement is not true in all cases. Some write requests may be associated with a response, others won't. (depending on the functionality and performance requirements).

For example, D2H MemWr request on CXL.mem does not expect a response.

What would be the impact of variation in Maximum Payload Size (MPS) and Maximum Read Request Size (MRRS) on performance over CXL?

MPS and MRRS are PCIe concepts that only apply to CXL.io, they don't exist in CXL.mem/.cache transactions.

Since the objective is to use .io for control/legacy and to reach high traffic on .mem/.cache, there is no impact of MPS/MRRS on performance.

That being said, other parameters can impact the flit packing efficiency, and hence performances (e.g. support of MDH).

PCIe uses NTB. How can CXL be considered?

In CXL 1.1 there is no provision for an NTB-like mechanism that would allow cross-domain communication, though it’s possible future versions of the CXL specification may introduce such a mechanism.

Did you mention that CXL 2.0 supports switch and only supports 1 layer?

How do CXL and Gen-Z work together?

Will it support atomic operations?

Even though the CXL 1.1 specification does not specify atomics, the coherent nature of CXL.cache and CXL.mem means that atomics are fully supported. For instance, in Device Bias mode a device could perform any atomic operation on its cache lines before releasing ownership to the host.

Many CXL consortium members are in the storage space and could be looking at integrating CXL, though CXL.mem/CXL.cache will likely benefit from new types of storage devices such as Storage Class Memory (SCM).

No, it is not suitable for connection between two meshes, this is because it is an asymmetric protocol.

Does CXL spec only support PCIe Gen5 devices or is it also compatible with Gen4, and even Gen3?

With CXL, will the app level become the bottleneck of latency instead?

Yes, it is possible.

PLDA IP will support CXL 2.0 as soon as it is officially released.

How does CXL compare with CCIX? and Latency?

CXL is an asymmetric interface, so there will be host and device or master and subordinate roles on the link.  So CXL is more suitable for a system which has a main CPU to control all the peripherals.  CCIX is a symmetric interface, with each end acting as ae master to access the other end, so it is more suitable for connecting two peers.  Since CCIX is PCIe based, its latency will be higher than CXL.

Could you help show us the cycle count that is cost in each layer of CXL?

This requires a NDA with PLDA to access those numbers.