In our last article, we address some of the changes in the PCIe 6.0 specification versus prior generations. Of note in that was that the release cadence of specifications has greatly increased.

As a reminder of how the PCIe specification has evolved: 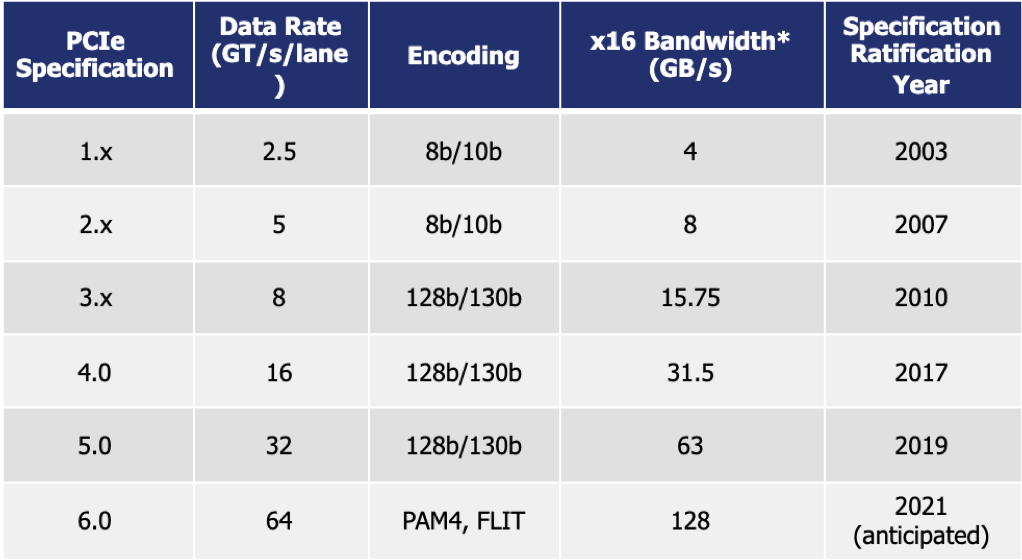 Looking at the table above, you can see that pre-4.0, specifications were updated every 4.6 years on average. However, since 4.0, the cadence has greatly increased, with a release every 2 years. A logical question here might be ‘why have 5.0 and 6.0 come so fast?’

When we look at PCIe, we can break it down to 2 distinct eras - Pre-2015 and Post-2015. Pre-2015, the PCIe was well ahead of the market in terms of available bandwidth required for the use cases. Basically, there wasn’t a market need to run faster, thus the slower evolution of the specification. However, Post-2015, global data traffic has exploded. Data centers started to transition to 100G Ethernet (and up), and with that, PCIe also had to evolve so as not to become a bottleneck. To note: looking at pure bandwidth, PCIe 6.0 should be able to fully support the transition to 800G Ethernet in data centers. But data center compute and networking are not the sole driving forces behind PCIe 6.0, and not the only markets that will benefit. Artificial Intelligence and Machine Learning chips require the fastest data rates possible; training models are all about speed, and the faster they can move data in and out, the more efficient and effective the algorithm can become. As cars become increasingly connected and autonomous, experts predict that they will generate 5 to 20TBs of data per day -- all that data has to be moved around the automobile in a power and speed-efficient manner, with PCIe being the perfect method for doing so.

PCIe is omnipresent in every modern computing architecture, and we expect PCIe 6.0 will gain quick adoption in performance-critical applications in the HPC & Cloud Computing space, the Enterprise Storage and Networking space, and in emerging applications such as AI/Machine Learning and Automobiles.

In short...PCIe 6.0 has come so quick because the market is demanding it. Certainly not every customer will require the speeds of PCIe 6.0, and for that, PLDA can offer our PCIe 5.0, 4.0, and prior generation controller IPs. Additionally, the XpressRICH PCIe 6.0 controller IP is backwards compatible, allowing it to be used with any prior generation PCIe interface.